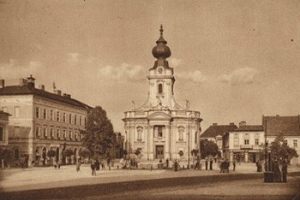 The History of Wadowice

Wadowice – the history of the town dates back to the 13th century. The town was owned by Silesian Piasts and was part of the county of Oświęcim. Later it was divided and became part of the county of Zator. In 1564 it was incorporated into the Crown. Although Wadowice was a crafts center its full development was hindered by fires, epidemics and wars. In the 17th century the town became famous because of Marcin Wadowita a theologian, philosopher and a Dean of the Academy of Krakow. The town started to enjoy prosperity in 1819 when Wadowice became the capital of the local district. Numerous public offices as well as a court, a military hospital and barracks for the Austrian 56 infantry regiment were all established or built around that time. The Gymnastics Society ‘Sokół’ and other social and patriotic organizations thrived. The town was also a major publishing center.

Wadowice is also the birthplace of karol Wojtyła, who was born at 7 Kościelna Street on 18th may 1920. It was also in Wadowice where he attended his primary and grammar schools. After graduation he left Wadowice to study at university in Kraków. On 16th October 1978 Karol Wojtyła was elected pope and adopted the name of John Paul II.

Wadowice was coming into the intensive period of transformations and development after huge turning-point in 1989. Since 1990 there is a premises of the high-powered local government. However since 1999 Wadowice has become the capital of the administrative district. Nowadays the town is a firm municipal, pilgrim and tourist centre.